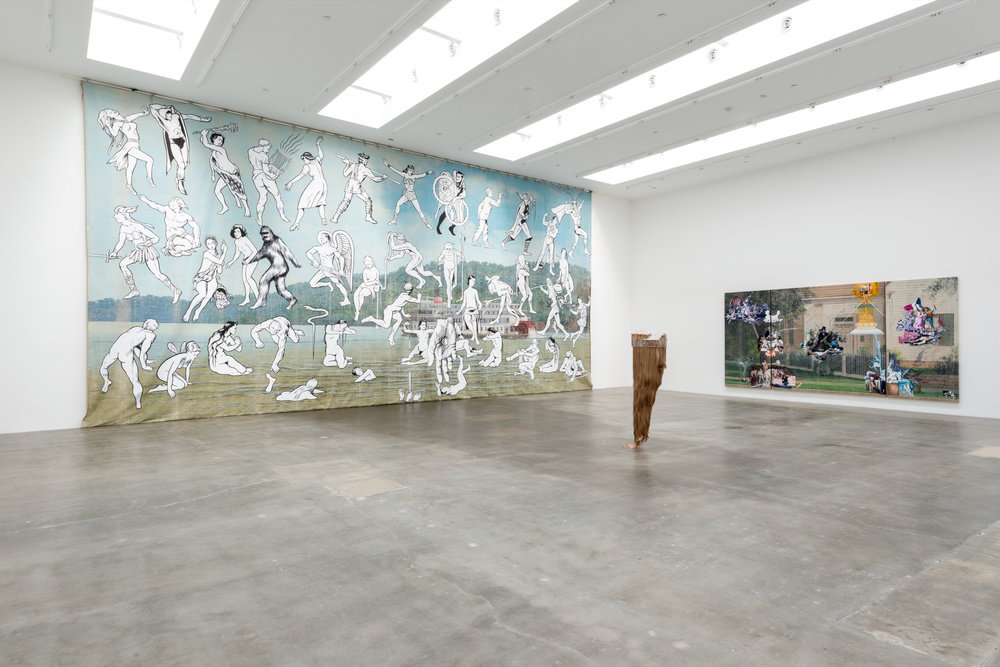 Jim Shaw (b. 1952, Midland, MI) is a multidisciplinary artist and an icon of the Los Angeles art scene. His work explores the countercultures and subconscious of American society, interwoven with personal history. Shaw grew up in Michigan during a time of great economic expansion—a time also known for the baby boom, the formation of suburbs, and the creation of consumer culture as we know it today. Along with the artist Mike Kelley, a fellow student at the University of Michigan, Shaw was a founder of the short-lived but influential punk-noise band Destroy All Monsters. He moved to Los Angeles in the 1970s to attend California Institute of the Arts and he is arguably one of the most notable artists to emerge from the school at that time.

Shaw’s sources and affinities range from William Blake to Surrealism and Pop art, DC comics, science fiction, teenage psychedelia, thrift store art, political cartoons, and the work of his contemporaries. For his 2015 museum survey exhibition The End Is Here at the New Museum in New York, Shaw delved deep into another one of his recurring fascinations: the apocalypse. The exhibition included early airbrush drawings, selections from his series Dream Drawings (1992–99) and Dream Objects (1994–present), as well as a large-scale, immersive installation of sculptures and painted theatrical backdrops. This survey also included a presentation of his collection of thrift store paintings, originally shown in New York in 1991, as well as a collection of religious and pedagogical materials that he began collecting as a teenager known as The Hidden World. In this open-ended project, Shaw questions the myths and beliefs of different religions in America by surveying the spiritual landscape. As a result, his extensive research led to the formation of a fictitious religion called O-ism which is influenced by the Bible, philosophy, science, and ancient culture. Shaw has created several bodies of work related to O-ism which is an ongoing topic.

Shaw’s paintings, rendered in extreme detail and some of which are painted on theatrical backdrops, incorporate symbols and characters that chart the country’s ever-changing reality. For his Man-Machine series, for example, Shaw considers the idea that humans are slowly becoming part machine. Rather than humans using technology as a tool, we are increasingly becoming more dependent on it. Shaw appropriates imagery from consumer catalogues from the 1960s or ‘70s, juxtaposing domestic appliances with surreal landscapes, utilizing the past as a lens to reflect on current ideas.

Shaw lives and works in Los Angeles. He received his BA from the University of Michigan, Ann Arbor, MI and his MFA at California Institute of the Arts, Valencia, CA His work has been exhibited extensively and has been the subject of numerous solo exhibitions, including most recently at the Marciano Art Foundation, Los Angeles, CA (2017); Massachusetts Museum of Contemporary Art, North Adams, MA (2015); New Museum, New York, NY (2015); Chalet Society, Paris, France (2013); Museum Boijmans van Beuningen, Rotterdam, Netherlands (2013); and a career retrospective at the Baltic Centre for Contemporary Art, Gateshead, UK (2012); among many more. Shaw was included in the National Gallery of Victoria Triennial, Melbourne, Australia in 2020, and in TheEncyclopedic Palace at the 55th Venice Biennale which was curated by Massimiliano Gioni, in 2013.

Jim Shaw: The End is Here

Jim Shaw: Everything Must Go