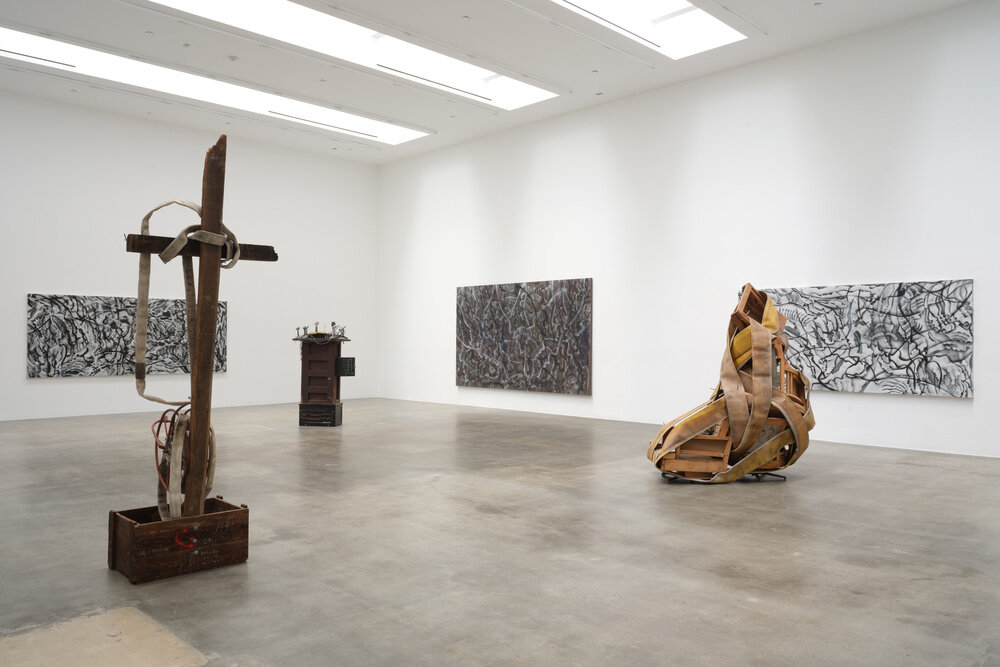 What Have They Done with America?

Born in 1950 in Jim Crow-era Birmingham, Alabama as the seventh of twenty-seven children, Holley had a difficult childhood, working from the age of five in various jobs—picking up trash at a drive-in movie theater, washing dishes, picking cotton, digging graves, serving as a short order cook at Disney World. His itinerant childhood, living across the South in various precarious circumstances, was chaotic, leaving a deep imprint on his work.

Holley made his first sculptures when he carved tombstones for nieces who perished in a house fire in 1979. Over the following years, he devoted himself to making sculptures that populated his property near Birmingham, eventually bringing some of his sandstone works to the director of the Birmingham Museum of Art. After his inclusion in the benchmark exhibition Souls Grown Deep: African American Vernacular Art of the South, organized by William Arnett in 1996, Holley’s work began to attract attention beyond Alabama. He soon became one of the foremost artists of the Afro-Atlantic aesthetic that blossomed across the Southern United States.

Holley’s Birmingham art environment was destroyed in 1997. In 2010, he settled in Atlanta, Georgia, where he lives and works today. While he has been making music most of his adult life, his career as a performing artist did not begin until he began professionally recording his music in 2006. Since then, Holley has recorded five studio albums. His latest record, a collaboration with Matthew E. White entitled Broken Mirror: A Selfie Reflection, was released in early April 2021. Holley has toured the world with various musicians; his ever-evolving compositions and lyrics are improvised and morph with each concert and recording.

In 2021, Holley was featured in Lonnie Holley: Tangled Up in De Kooning’s Fence, curated by Alison M. Gingeras, at South Etna Montauk’s gallery space. The exhibition coincided with Everything That’s Not White, Holley’s solo exhibition at the Parrish Art Museum in Watermill, NY. Both exhibitions featured a range of paintings, sculptures, and works on paper that Holley made over the course of his residency on the East End.

Hyperallergic: Going Back to the Ditch with Lonnie Holley

Lonnie Holley's I Snuck off the Slave Ship + Live Set

Artnet News: Step into the Jam-Packed Studio of Lonnie Holley, Whose Latest Works Include Ceramics and Musical Compositions

Something to Take My Place: The Art of Lonnie Holley