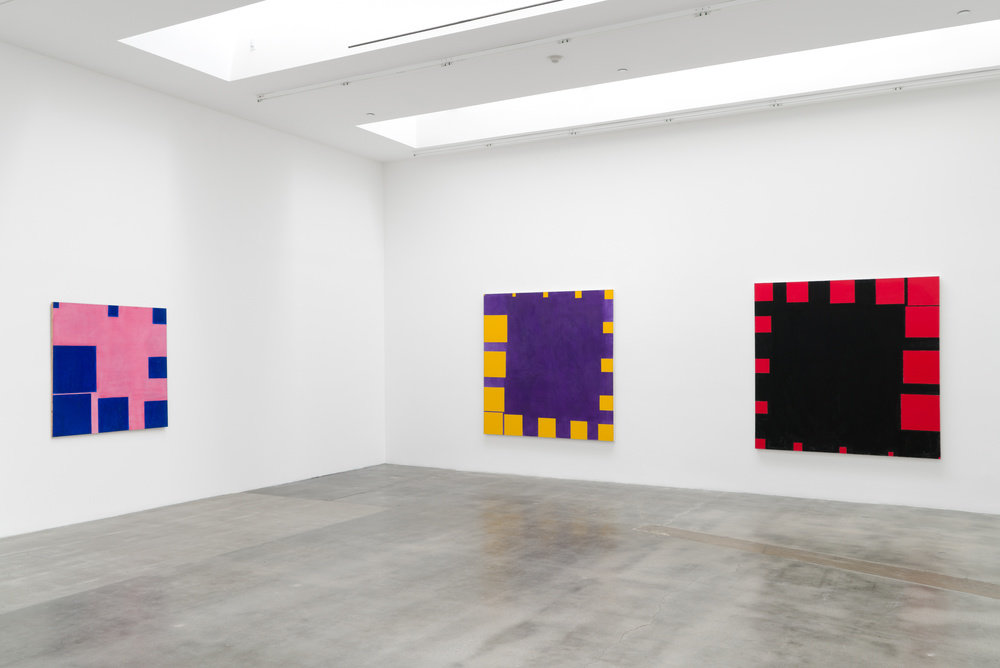 Over a fifty-year career, Paul Mogensen (b. 1941, Los Angeles, CA) has explored painting through mathematical progressions and classical ratios in structured arrangements of squares, rectangles and lines; through an engagement with the wall and negative space; and through color straight from the tube. Initially a student of mathematics and chemistry before he discovered art, he says, “I use arithmetic to find the form.” His works are precise with Morse-code-like sequences, unmediated by associative or narrative props, or by any sign of the artist’s hand in the paint’s application. The works are unobstructed even by the storyline of Mogensen’s own personal development—most are untitled and undated, drawing attention away from these constructs and instead towards the immediacy of the works themselves. As longtime friend Lynda Benglis has said, “He’s a philosopher purist, very logical in terms of accepting the most direct means of making a painting with great clarity… He is stringent in his approach, as stringent as a mechanic might be with a Ferrari. There are no accidents.”

Mogensen arrived in New York in 1966 already associated with such peers as David Novros and, through Novros, Brice Marden. His first solo exhibition, at the Bykert Gallery (backed by Jeff Byers and run by Klaus Kertess), came the following year. Like many of his peers of the era, he rejects the terminology that such art has generated, particularly the labels “minimalism” and “abstraction.” Mogensen resists the metaphorical and conceptualist explanatory language of the generation associated with such notions, and contrary to the tendency of the genre towards an escape from history, he has a deeply researched and highly individual appreciation of historical art. Mogensen will often reference Russian artists and poets such as Mayakovsky, Rodchenko, and Tatlin, along with the less evident influence of fourteenth century Sienese painting. In recent years, Mogensen has engaged with N+1 progressions, spiraling cubic forms that play with the mind’s tendency to complete visual patterns that are merely insinuated. The artist is very much still pushing his practice forward—as Roberta Smith wrote last year: “it would be too simple to say that Paul Mogensen is doing the best work of his life right now.”

The New Criterion: A Cleaner Slate