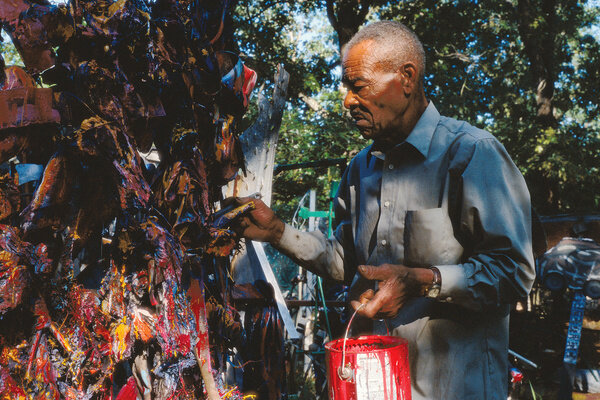 Thornton Dial (b. 1928, Emelle, AL; d. 2016, McCalla, AL) transcended the circumstances of his birth to become a significant figure in the world of contemporary American art with the creation of drawings, assemblages, sculptures, and installations. His artistic legacy is testament both to the uniqueness of the African-American experience and the universal nature of the human condition.

Thornton Dial was born and raised in rural Emelle and began full-time work at the age of five, picking cotton and handling mules in the western flatlands of Alabama. Over the course of his life, he did “every kind of work a man can do” including carpentry, painting, construction, welding, plumbing, iron and steel work, and a thirty-year stint making train cars at Pullman-Standard in Bessemer, AL. He was by his own characterization, “a working man” and these cumulative experiences would be essential to the artist he became.

Studying Dial’s artistic output is akin to reading a more inclusive version of modern American history that traces the shared experiences of many African-Americans of his generation: sharecropping in the Black Belt, the Great Migration from rural to urban centers, the civil rights movement, the ethnic conundrums of a rapidly changing postmodern America, the election of the first African-American president, and beyond. This decades-long meditation is complex in both subject and materiality, and the gallery will be developing a multi-faceted program to examine the arc of his artistic evolution and place in the art-historical canon.

Dial’s work, in all its forms, was born of the same cultural impulse that gave rise to gospel, blues, jazz, and rock n’ roll. It is also closely aligned with the yard show, a visual counterpart to these musical idioms. This flowering of creativity proliferated across the Southern United States shortly after the assassination of Dr. Martin Luther King Jr. when many African-American artists intensified their creation of sculptural environments, and did so publicly, employing the front yard as a place for artistic expression alongside cemeteries, home interiors, or other more anonymous spaces the communities had occupied for centuries. Dial harnessed this history, and using found objects imbued with metaphorical significance, fused the yard show aesthetic with the patterning and sensibility of the patchwork quilt. His multilayered works confound aesthetic categorization and are perhaps best understood by what they have become: visual and symbolic bridges from the oldest African-American artistic traditions to major museums and collections across the globe. Dial’s masterful drawings treat many of the same overall subjects but are disproportionately focused on women and their complex roles as sources of power, strength, conflict, inspiration and love for an artist who never knew his father and was raised by his grandmother and great-aunt. His relationship to these women was fundamental and long inspiring, as they were his initial points of contact to a larger cultural history.

For Dial, art was tangible evidence of his freedom—something he did not take for granted—and a path to a brighter collective future for us all. He often examined events of the past but looked optimistically, if carefully, towards the future. In his own words, “I respect the past of life, but I don’t worry too much about it because it’s done passed. The struggles that we all have did, those struggles can teach us how to make improvement for the future. Art is like a bright star up ahead in the darkness of the world. It can lead peoples through the darkness and help them from being afraid of the darkness. Art is a guide for every person who is looking for something. That’s how I can describe myself: Mr. Dial is a man looking for something.”

New York Times: Letting His Life’s Work Do the Talking