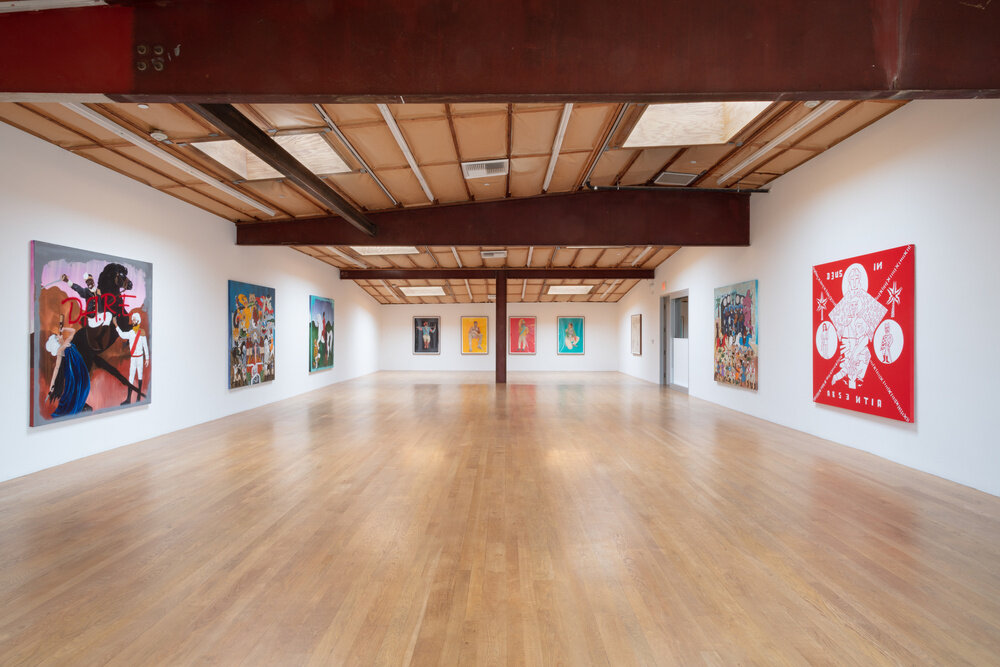 Umar Rashid (b. 1976, Chicago, IL) makes paintings, drawings, and sculptures that chronicle the grand historical fiction of the Frenglish Empire (1648–1880) that he has been developing for over seventeen years. Each work represents a frozen moment from this parallel world that often recalls our own fraught histories—both canonized and marginalized—with familiar signifiers and iconographies that channel the visual lexicons of hip hop, ancient and modern pop culture, gang and prison life, and revolutionary movements throughout time. This alternative history and its many subplots are told with elaborate visual and literary detail—with painterly tableaus depicting large networks of protagonists that relate to one another across bodies of work, and with lyrical and humorous artwork titles often a paragraph in length. Each exhibition is produced in response to the geographical locale of the host site; each time Rashid building upon his encyclopedic knowledge of global colonial history and conjuring new fabulations that underline the roles of race, gender, class, and power in the tales of what was, what was recorded, what was negated, and what could have been.

Umar Rashid lives and works in Los Angeles, CA. He received his BA in cinema and photography from Southern Illinois University, Carbondale, IL. His work was featured at The Huntington and the Hammer Museum as part of the biennial Made in LA 2020: a version. Recent institutional solo exhibitions include What is the color when black is burned? (The Gold War Part 1), University of Arizona Museum of Art, Tucson, AZ (2018); and The Belhaven Republic (A Delta Blues), University of Memphis Galleries A and B, Memphis, TN (2017). Rashid’s work is represented in the public collections of the Brooklyn Museum, Brooklyn, NY; Hudson River Museum, Yonkers, NY; Jorge Pérez Collection, Miami, FL; Mount Holyoke Art Museum, South Hadley, MA; Nevada Museum of Art, Reno, NV; Ruth and Elmer Wellin Museum of Art at Hamilton College, Clinton, NY; Santa Barbara Museum of Art, Santa Barbara, CA; Wadsworth Atheneum Museum of Art, Hartford, CT; and the Zeitz Museum of Contemporary Art Africa, Cape Town, South Africa, among others.