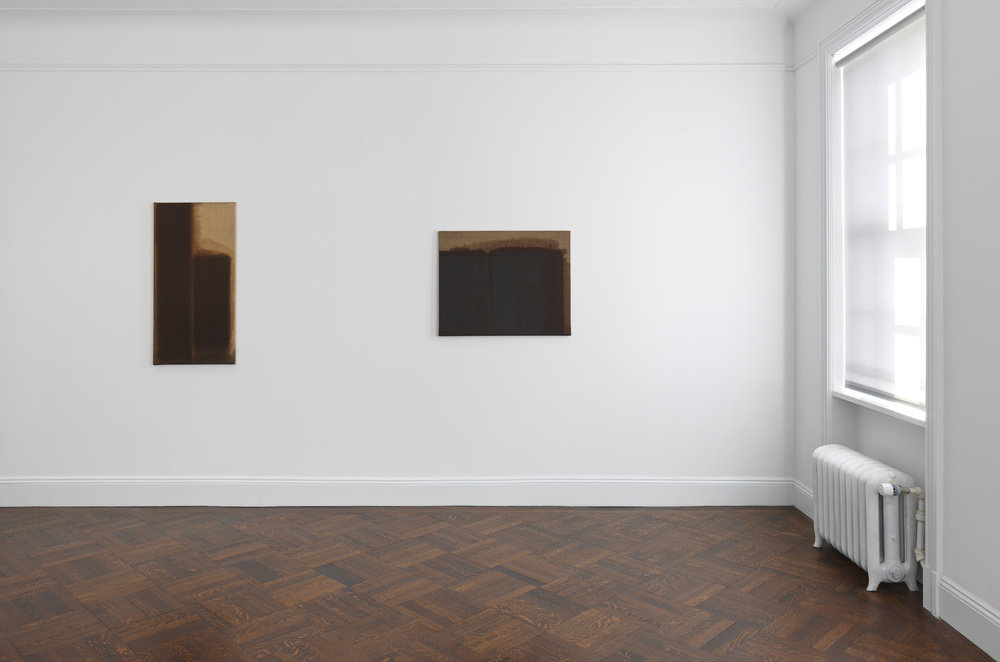 Yun Hyong-keun (b. 1928, Mi-won, Chung-Puk, Korea; d. 2007) was born in Cheongju, South Korea. In 1947, he enrolled at Seoul National University to study Western painting, but his academic path was interrupted by the outbreak of the Korean War (1950–53) and several frightening experiences of political persecution. After graduating from Hongik University, Seoul in 1957, he engaged in a dialogue with artists that would later become the exponents of a movement termed Dansaekwha, or “monochrome painting.” Like Yun, these artists were born during Japan’s colonial rule of Korea and translated the distressing experience of this unstable period into quiet but powerful abstract compositions rendered in a limited palette of white and earth colors. At that time, the guidance of his mentor and father-in-law, eminent Korean painter Kim Whanki (1913–1974), was influential in determining his use of highly diluted pigments to achieve greater variations of light and dark. As early as 1973, Yun started developing two oil pigments that were to become his most characteristic hues: Burnt Umber, to represent the earth, and Ultramarine, for the water. These symbolic colors recur throughout his oeuvre in unfettered and highly evocative vertical brushstrokes, heavily diluted and layered to create an intense sense of depth and compositional expansiveness. In 1974, Yun visited New York where he encountered Abstract Expressionist painting and was especially impressed by the work of Mark Rothko. Reflecting on the openness of Yun’s subsequent works, Joan Kee states that "where Rothko stacked rectangular blocks along a vertical axis, even as they expanded laterally toward the left and right edges of the canvas, Yun divided pictorial space into sections that pulled the painting apart.” From the 1970s, Yun's international exposure increased as he exhibited regularly in Japan and, following a stay in Paris in the early 1980s, was appointed professor in the Fine Arts Department at Kyungwon University, Seongnam, Gyeonggi-do, Korea in 1984. After meeting in Seoul in 1991, Yun became friends with Donald Judd. Judd invited him to exhibit twice in the United States, first at his space in Spring Street, NY in 1993 and then at the Chinati Foundation, Marfa, TX in 1994. Maintaining a studio in Seoul, Yun continued to work and exhibit internationally until his death in 2007.

Yun Hyong-keun’s work has been celebrated in landmark surveys such as Dansaekhwa: Korean Monochrome Painting, National Museum of Modern and Contemporary Art, Gwacheon, South Korea (2012); Korean Abstract Art: 1958–2008, Seoul Museum of Art, Seoul, South Korea (2008); the Gwangju Biennale, Gwangju South Korea (2000); the 46th Venice Biennale, Venice, Italy (1995); Working with Nature: Traditional Thought in Contemporary Art from Korea, Tate Liverpool, UK (1992); and the São Paulo Biennial, Brazil (1969, 1975). Yun’s work was the focus of a retrospective at Palazzo Fortuny, Venice, Italy in 2019 and the National Museum of Modern and Contemporary Art, Seoul, South Korea in 2018. The Museum of Modern and Contemporary Art, Strasbourg, France, held a major retrospective in 2002. Recognition in the United States began when his paintings were included in From All Sides: Tansaekhwa on Abstraction, curated by Joan Kee, Associate Professor of History of Art at the University of Michigan, and held at Blum & Poe, Los Angeles, CA in 2014. This large-scale survey of Korean monochromatic painting from the 1960s to the 1980s was the first major overview of the movement in North America. Blum & Poe subsequently presented Yun’s first solo exhibition in New York in 2015. Yun was also in Dansaekhwa and Minimalism—the first overview of Korean monochromatic painting with American Minimalism—held at Blum & Poe in Los Angeles and New York in 2016. Yun's work is featured in a number of prestigious institutional collections including the Chinati Foundation, Marfa, TX; Leeum, Samsung Museum of Art, Seoul, South Korea; M+ Museum, Hong Kong, China; National Museum of Modern and Contemporary Art, Seoul, South Korea; and the Tokyo Metropolitan Art Museum, Tokyo, Japan, among many others.