Earth has always held a tangible presence in Lonnie Holley’s life. Not only the planetary Earth, but the earth humanity exists upon. The dirt and soil and rock. He hasn’t simply lived and walked on it, his life has routinely taken him in to it.

Holley’s intimacy with the earth and its insides will be apparent to anyone who’s spent time in his hometown of Birmingham, AL. Here at the southern end of the Appalachian Mountains, the earth has been violently manipulated by human progress.

The surface of the earth was scraped away for the building of an airport, the bulldozers working not a mile from Holley’s childhood home. He’d play on the huge piles of Alabama red dirt that were created by the construction. He remembers leaving footprints in the clay when it rained.

Then there was the gravedigging.

As a boy, he’d help his grandmother dig graves. Holley says his grandmother dug the graves for the Birmingham Four–the four little girls, three aged 14, one aged 11, who were murdered at the 16th Street Baptist Church in Birmingham in 1963 when members of the Ku Klux Klan placed dynamite underneath its front steps, bombing them in an act of racist violence the shock and horror of which has yet to subside almost 60 years later.

One astounding anecdote from a life overflowing with them.

Also in childhood he worked as a construction traffic flagman during Birmingham’s Red Mountain Cut, a road project which dug through a mountain creating more convenient access to town, in the process revealing what the Earth looks like on the inside.

For decades, he lived in a Birmingham hillside. In the earth.

“I think I began doing my art when I was told to get out of the house and dig worms,” he told Bitter Southerner in an interview.

Holley was invited by Dallas Contemporary to visit the Cerámica Suro in Guadalajara, Mexico in 2021. He spent two-and-a-half weeks there making and painting ceramic vases, creating small sculptures out of clay, making paintings on the factory’s famed tiles. He visited the area’s round pyramids and studied early clay makers. What he created on-site will be displayed in the show.

“Working with the clay gave me a feel of the earth,” Holley told Forbes.com of the recent project which he views in continuum with his entire life. “Not only from Guadalajara and the clay, but all the way back to when I first began–it’s still about digging. It’s still about me being in the graveyard helping my grandmamma dig this grave, or being at the top of the landfill helping my grandmamma rake pieces out of a landfill to put into 5-gallon barrels (to get money for).”

The influence of his time spent scrapping and scouring landfills, junkyards, abandoned buildings and the industrial and architectural detritus of Birmingham, tuning those found objects into sculptural art pieces, are what most people know Holley for. That was the work that first drew the attention of what would become Souls Grown Deep. That is the work that now fills the nation’s fine art museums.

That work too came from the earth. It came from the ground. The materials were discarded objects Holley uncovered, unburied or simply picked up and transformed into art, a process which began in 1979 when the artist was 29-years-old. That was the year a niece and nephew died in a house fire.

Part of his grieving process included him fashioning artworks out of the remains of the home.

“I’m not a ‘pretty’ creator—the things I create are about the truth. A canvas doesn’t satisfy me,” Holley explains. “The materials themselves have layers and I have to have those layers. I’ve been involved with those layers all my life and I’m still involved with them.”

Anyone who’s ever driven through the Red Mountain Cut will understand where Holley’s fascination with layers began.

Holley has been making work steadily since the fire, but only began showing his work in the past few years. His life is now devoted to multidimensional creativity drawing upon his Alabama upbringing, working across drawing, painting, sculpture, photography, performance and sound.

Holley’s creativity additionally expresses itself in music. He released a new music video in February of 2022.

Notably, both his art and music are improvisational, with no two artworks or compositions ever the same. Holley makes no distinction between the mediums.

“My intention is for people that have the imagination to close their eyes and see my replacement of objects and how I try to put that into words to a point where they can better understand,” he said.

What Holley wants people to understand now is the irreversible damage humanity is doing to the Earth. A conversation with him about art can rapidly move into discussions of climate change, America’s fossil fuel addiction and extraction economy, water rights and usage, overconsumption, the plastic pollution epidemic, biodiversity loss, renewable energy and deforestation.

“The earth around me has impacted me so much more now and I’m afraid,” he admits. “I really am very fearful of these conditions. We’ve set a living torch upon the earth. All these things we took out of the earth, we have them in containers on top of the earth.”

He’s always seen the ecological calamities dominating today’s headlines addressed in his work, even if no one else could.

“It was like I was a profit stuck under the debris of humankind,” Holley said. “My works were out of the norm–not the normal things people were interested in viewing.”

Holley has work on view in a group show recently opened at the Carnegie Museum of Art in Pittsburgh. He held a performance earlier this month at the Toledo Art Museum and has one scheduled for Artangel in London this May, coinciding with a new exhibition at Edel Assanti gallery that month, and a show at Blum & Poe LA this July.

Coming from the Earth will be on view through August 21, but that’s not the last art lovers will be seeing of Holley.

“I never say ‘bye,’” he says, preferring, “Thumbs up from another universe until we meet again.” 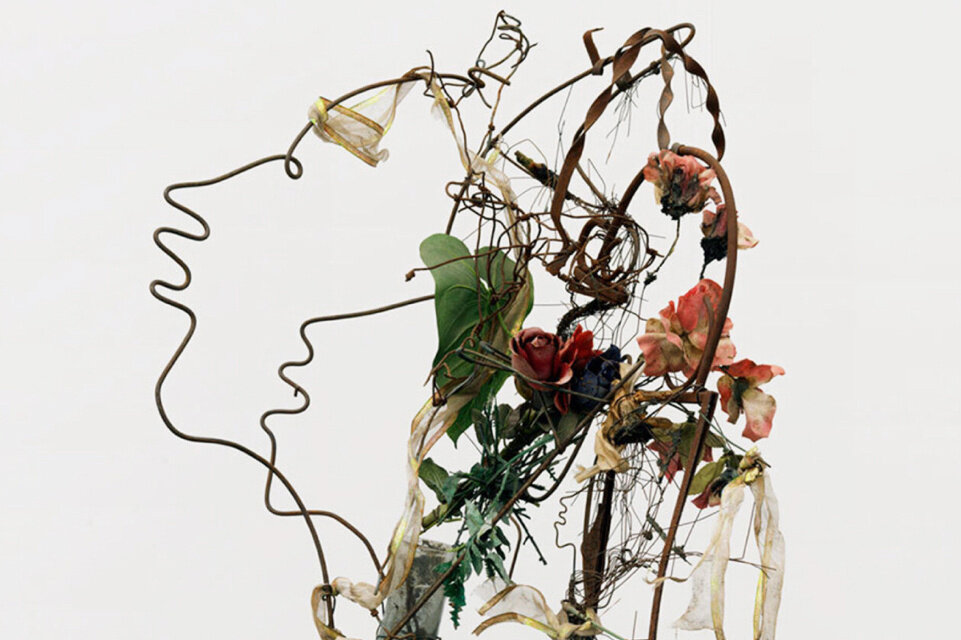