Art and Race Matters: The Career of Robert Colescott, a clamorous retrospective at the New Museum, bodes to be enjoyed by practically everyone who sees it, though some may be nagged by inklings that they shouldn’t. For more than three decades, until he was slowed by health ailments in the two-thousands—he died in 2009, at the age of eighty-three—the impetuous figurative painter danced across minefields of racial and sexual provocation, celebrating libertine romance and cannibalizing canonical art history by way of appreciative parody. He was born in California, the son of musicians from New Orleans. His mother, certainly, and possibly his father, who worked as a railroad waiter, had enslaved ancestors, but both of them—and Colescott—could pass for white. As Matthew Weseley, the co-curator of the show with Lowery Stokes Sims, recounts in the splendid catalogue, Colescott’s mother insisted on the ruse, which he adopted. The mild-mannered modernism of his early works, sampled at the New Museum, affords no hints to the contrary.

This changed explosively when Colescott turned forty during a spell, between 1964 and 1967, of sojourns in Egypt, where he imbibed old and new African cultures. From that epiphanic moment on, he went all-in on the complexities of his racial identity. Being an American Black man, whatever else he was, became the dominant conceit—and license—of his subsequent art, which he imbued with perhaps penitent, palpably vengeful irony, for the rest of his life. By not sparing himself from a pageant of caricatural mockeries, he offered no distance, let alone escape, from the fault lines of race in American democracy. As a bonus, he was freed to burlesque, with terrific energy, motifs of past Western art that he had always revered.

In a mood to be rattled? Contemplate Eat Dem Taters (1975), an all-Black recasting of van Gogh’s early tableau of impoverished Dutch peasants sharing a frugal meal, The Potato Eaters (1885), with an aura of minstrelsy. How could Colescott—or anyone, really—have expected to get away with that or, from the same year, with a race-switching pastiche of Emanuel Leutze’s nationalist chestnut Washington Crossing the Delaware (1851)? A bespectacled George Washington Carver, the pioneering botanist, stands in for the nation-founding hero of the Revolutionary War. A gleeful fisherman at the bow of the boat reels in a catch. A banjo player strums in the stern.

Not yet sufficiently affronted? Throw in A Winning Combination (1974), in which a perky white majorette, backed by a rippling Stars and Stripes, is naked from the waist down. Add Beauty is in the Eye of the Beholder (1979), a self-portrait of the artist distracted by a disrobing white model while repainting Matisse’s hedonist masterpiece Dance, from 1910. Still with me? How about The Judgment of Paris (1984), in which a clothed Black protagonist is lasciviously vamped by a nude white Venus, to the disgruntlement of white and Black rival goddesses? Rather than angrily or mournfully critiquing racist stereotypes and associated taboos, Colescott shot the moon with them.

A lot goes on in these pictures, starting with how they are executed, in a fast and loose, juicy Expressionist manner and by means of a blazing palette that runs to saturated pink and magenta and thunderous blue. Along the way, Colescott pillages the distinctive hues of Willem de Kooning’s iconic Woman I (1951) with I Gets a Thrill, Too, When I Sees De Koo (1978), in which the face of a grinning Black woman wearing a head scarf replaces that of the Dutchman’s generic white female. (The title kidded a redoing of de Kooning the previous year, I Still Get a Thrill When I See Bill, by the Pop artist Mel Ramos.) Colescott shrugged off abstract and conceptualist fashions of the late nineteen-sixties and early seventies, guaranteeing himself a marginal status in the mainstream art world as a special taste or, let’s say, anti-taste. As if in sweet revenge, his atavistic style and what-the-hell nerve began to influence younger artists of many backgrounds in the late seventies and continue to do so today. Without the spur of his breakthrough audacity, it’s hard to imagine the recent and ongoing triumphs of, among others, the fearlessly satirical artists Kerry James Marshall and Kara Walker.

The choice of Colescott to represent the United States at the 1997 Venice Biennale initiated a general surrender to his ineluctable power, though most of America’s upper-crust institutions have yet to capitulate. The New Museum’s presentation of Art and Race Matters is a previously unplanned addendum to a tour that débuted in Cincinnati and, having travelled to Portland and Sarasota, was set to end in Chicago. Roberta Smith, who reviewed the show in the Times, properly declared the implicit squeamishness a disgrace to our major New York museums, whose lip service to diversity characteristically stops short of anything that isn’t respectably theorized and may be just too roguishly irreverent.

As freewheeling in life as on canvas, Colescott married six times, twice to the same woman, whom he accordingly twice divorced, while studying and then teaching at a series of West Coast and Southwest schools and colleges. After wartime service in the Army, he attended a class in Paris led by Fernand Léger and, in 1951, earned a master’s degree from the University of California, Berkeley. In the catalogue, erudition, wit, and wisdom mark a lively selection of his occasional writings, in which he proves to be his own most discerning critic. His last position, before retiring, in 1995, was as a tenured professor at the University of Arizona, Tucson.

Is there something to be said against Colescott’s untrammelled temerity? If you wish—I, for one, am hospitable to argument—but resistance isn’t easy while you’re feeling delightfully knocked about like a sensitized pinball in rooms crowded with the artist’s most aggressive creations. The effect is comic in a key beyond outrageous. Inrageous? Metarageous? I’m reminded of the liberating shock of Mel Brooks’s flabbergasting movie The Producers, which happened to coincide, in 1967, with the onset of Colescott’s painterly insurgency. Undeniably, while trashing American iniquities and insulting compensatory inhibitions, he let—or, more accurately, made, at a volume to wake the dead—freedom ring. 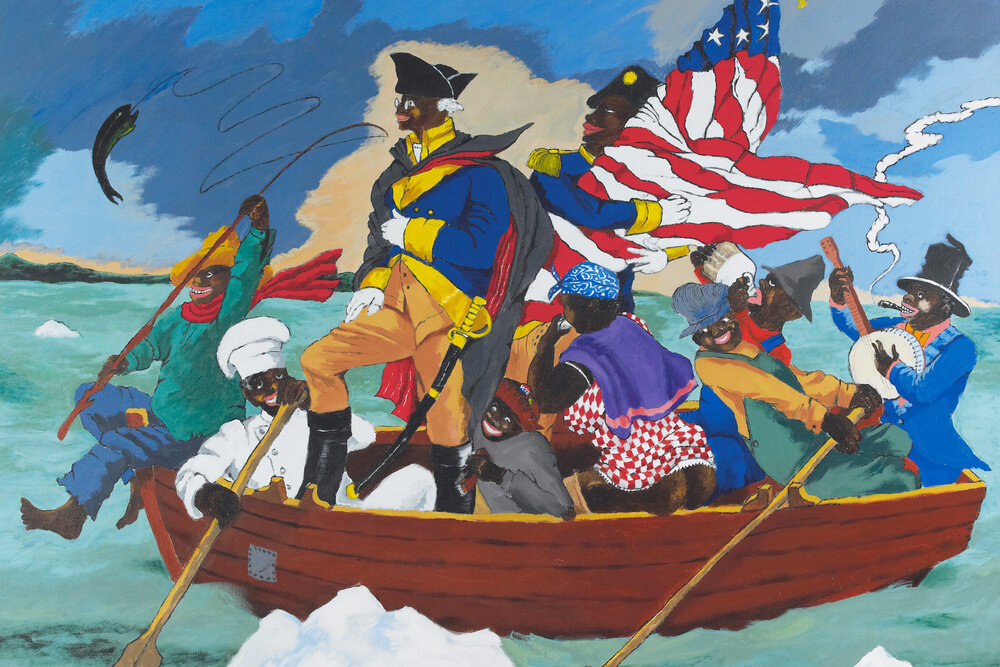