High Line Art is pleased to present the second High Line Plinth commission: Untitled (drone), a large-scale fiberglass sculpture mounted 25 feet high, by artist Sam Durant. Located on the park at West 30th Street and 10th Avenue, the Plinth, as a landmark destination for major public art, features a rotating program of new monumental commissions. Durant’s artwork will be installed on the High Line in May 2021 and will be on view through August 2022.

Across drawings, sculptures, installations, and community-driven public projects, Durant examines the ways in which groups of people make their values visible and heard in public space. One of his central subjects is America, its history, and the complexities of its power relationships. Over the past two decades, Durant has investigated the nature of public space—both its physical manifestation with monuments and public institutions, and the activities that take place in the public realm, including political rallies and civic uprisings.

For the Plinth, Durant presents Untitled (drone), a sculpture in the shape of an abstracted drone sitting atop a 25-foot-tall steel pole. Durant removes all details from the drone—decals, landing gear, cameras, weapons—rendering it as a streamlined sculpture that evokes the biomorphic forms of Constantin Brancusi or Barbara Hepworth. Shaped from white fiberglass, the sculpture hovers above 10th Avenue, rotating on its steel pole as directed by the wind.

The sculpture is modeled after the Predator drone, a remotely piloted aircraft that was used by the US military beginning in 1995 to conduct reconnaissance around the world and, later, airstrikes in countries including Afghanistan, Iraq, Libya, Pakistan, Syria, Somalia, and Yemen. Its successor is currently employed by US Customs and Border Protection to surveil the nation’s borders and in support of law enforcement agencies, most recently in May 2020 to monitor protestors in Minneapolis responding to the murder of George Floyd. Similar technologies also have been adopted domestically by companies facilitating widespread city-sanctioned surveillance. With this work, Durant seeks to make visible the intentionally obscured drone warfare perpetuated by the US, and to remind the public that drones and surveillance are a tragic, menacing, and pervasive presence in the daily lives of many living outside—and within—the United States.

Cecilia Alemani, the Donald R. Mullen, Jr. Director & Chief Curator of High Line Art, says, “With Sam Durant’s Untitled (drone), the High Line Plinth continues its mission to present new, powerful, thought-provoking artworks that generate and amplify some of today’s most important conversations. With the Plinth program, we continue to challenge the assumptions that underlie public space: What is the function of the artworks that punctuate our parks and plazas? What is the responsibility of art and artists when it comes to standing against violence and warfare? Untitled (drone) brings critical visibility to issues that remain both hidden and pervasive in our societies. The High Line is a site for artists to take risks and realize courageous projects that face our contemporary crises. Our role is to support artists and their ideas.”

“Untitled (drone) is meant to animate the question about the use of drones, surveillance, and targeted killings in places far and near, and whether as a society we agree with and want to continue these practices,” says Sam Durant. “Art is a place where we can speculate about alternatives, other possibilities, where we can bring forward things that are unsaid, unknown or hidden from view, and have discussions about them. Art offers us the opportunity to think about the world in new ways. In moments of crisis, this is extremely important.”

An extensive public engagement and interpretation program for Untitled (drone) will be offered in conjunction with the sculpture’s presentation. More details will be announced in the coming months. 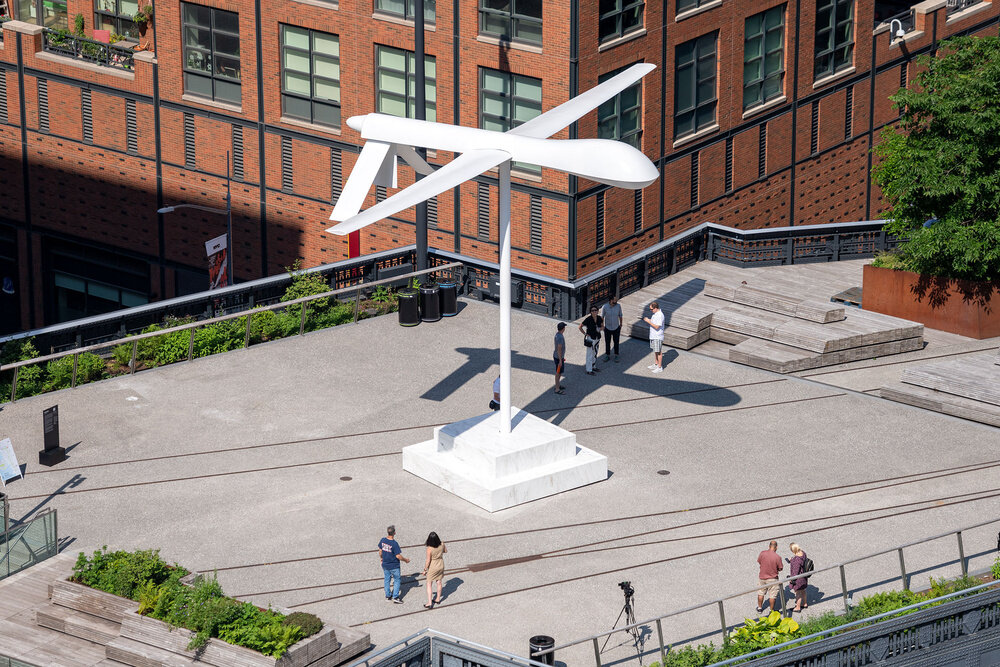 Our website uses cookies to improve user experience. Please click here to learn more.
By continuing to browse you are giving us your consent to our use of cookies.
I Accept
Blum & Poe Los Angeles and Tokyo are open by appointment, and walk-ins are welcome. Make a reservation here.